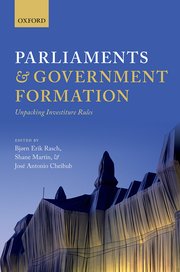 Bjørn Erik Rasch, Shane Martin, and José Antonio Cheibub edited a book on the role of parliaments in government formation. The book covers several countries, and the introduction can be read here. I wrote the chapter on Italy, where I assessed the effect of formal and informal rules on the type of governments which were in office since 1948. Perhaps the constitutional reform now under discussion in Parliament will dramatically change  the government formation process, abolishing the peculiar bicameral investiture procedure that has been in force until now.  In that case I will be happy to write an update.